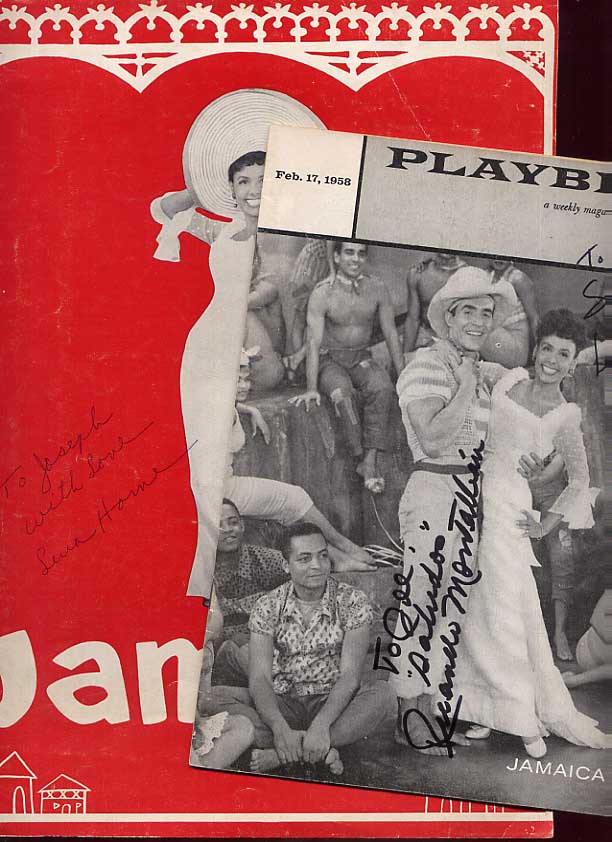 INSCRIBED AND SIGNED BY LENA HORNE ON THE FRONT COVER. ALSO LAID IN IS A PLAYBILL THAT HAS BEEN INSCRIBED AND SIGNED BY LENA HORNE AND RICARDO MONTALBAN. 20pg. original souvenir program and playbill from the 1958 musical that starred the great Lena Horne and Ricardo Montalban. Laid in the program is an original photograph from the musical. The show had a very decent run of 555 performances and was nominated for 7 Tony Awards. Corner crease and light wear to the program. Vg. Also included is 20pgs. large souvenir program for "Lena Horne: The Lady And Her Music" THAT HAS BEEN SIGNED IN SILVER INK BY MS. HORNE on the front cover. Ms. Horne did this one woman concert for 333 performances and won many awards including a special Tony. The program is from later in the run and has wear, some creasing to the covers which is mirrored throughout. Sold as a collection only.