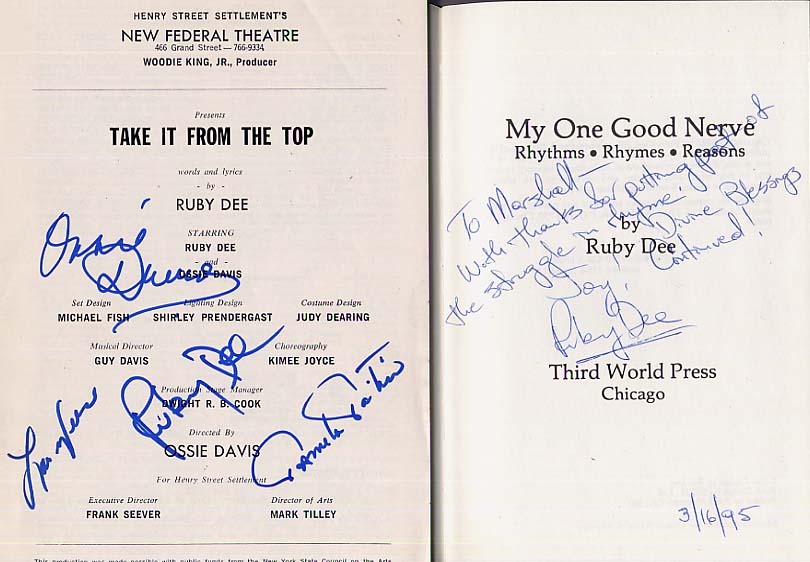 INSCRIBED. SIGNED AND DATED BY RUBY DEE IN 1995. Poems, short stories, tributes and more by the fine African American actress. The book's dustjacket has some rubbing and some tiny tears, Also included is a program from TAKE IT FROM THE TOP. This is a 6pg. foldover program from the Off Broadway production that had words and lyrics by Ruby Dee and starred her and her husband Ossie Davis. THE PROGRAM IS SIGNED BY RUBY DEE, OSSIE DAVIS, LOU MEYERS AND PAMELA POITIER (sidney's daughter).the program is fine. Also included is an original color tinted 11" x 14" lobby card from the 1960 film &...
View More...

SIGNED BY WILLIAM P. FRENCH. useful 44pg. no frills checklist of Black American Poetry. Soft crease to the back cover which is lightly mirrored to the last couple of pages. Vg.
View More...

Thornton Dial Image of the Tiger

Large lavish look at the African American self taught painter Thornton Dial. Includes essays by Amiri Baraka & Thomas Mcevilley along with notes on the works. Illustrated with 122 full color repros. of his paintings, assemblages and drawings. Very minute rippling to the top edges of the book, otherwise the book itself is near fine with a fine dustjacket.
View More... 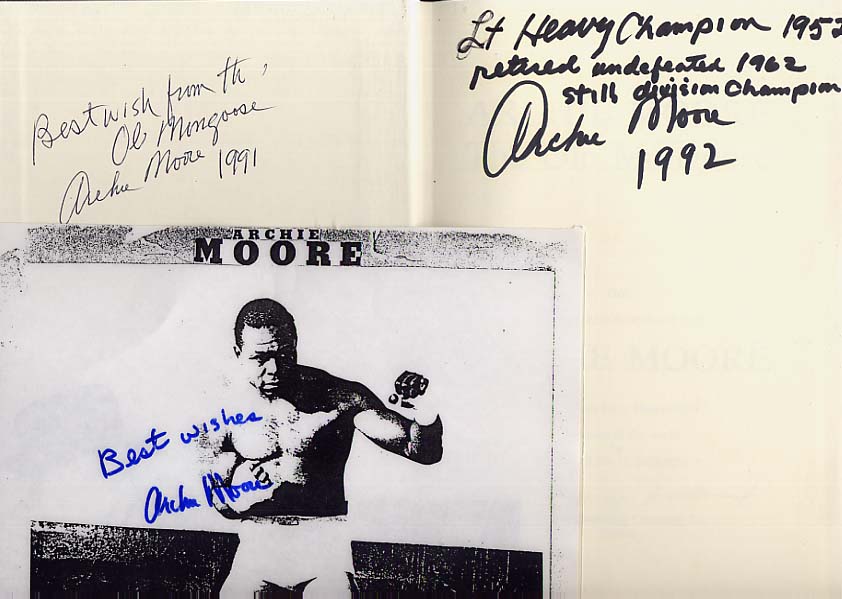 INSCRIBED AND SIGNED TWICE BY ARCHIE MOORE. MR. MOORE HAS INSCRIBED THE BOOK ON THE FRONT PASTEDOWN AND DATED IT 1991. ON THE FRONT ENDSHEET MOORE HAS WRITTEN; "LT HEAVY CHAMPION 1952 RETIRED UNDEFEATED 1962 STILL DIVISION CHAMPION ARCHIE MOORE 1992. ALSO LAID IN IS AN 8 X10" XEROX PORTRAIT OF MOORE FROM 1949 THAT HE RECENTLY SIGNED IN BLUE MARKER. THE BOOK IS ALSO SIGNED BY THE AUTHOR.ERRATA SLIP LAID IN. The life story of the great boxer. Nicely illustrated with many in-text photos and memorabilia. Fine/fine.
View More... 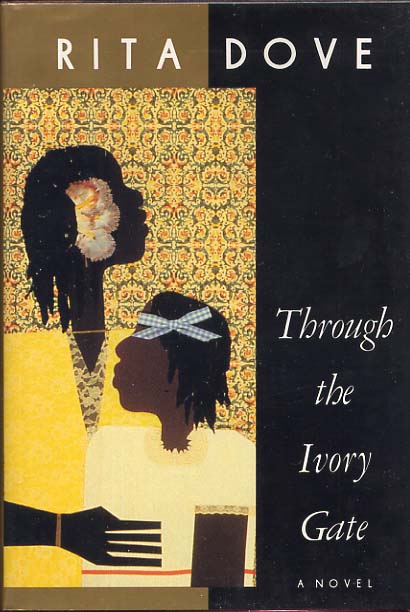 Through The Ivory Gate

SIGNED AND DATED BY RITA DOVE. The Pulizer Prize winning poet's first novel. Light bottom edge crease to the back panel. Postcard photo of the author laid in. 1 tiny teeny bottom corner fold to the back endsheet. A lovely copy in a very attractive dustjacket. Fine/near fine.
View More... 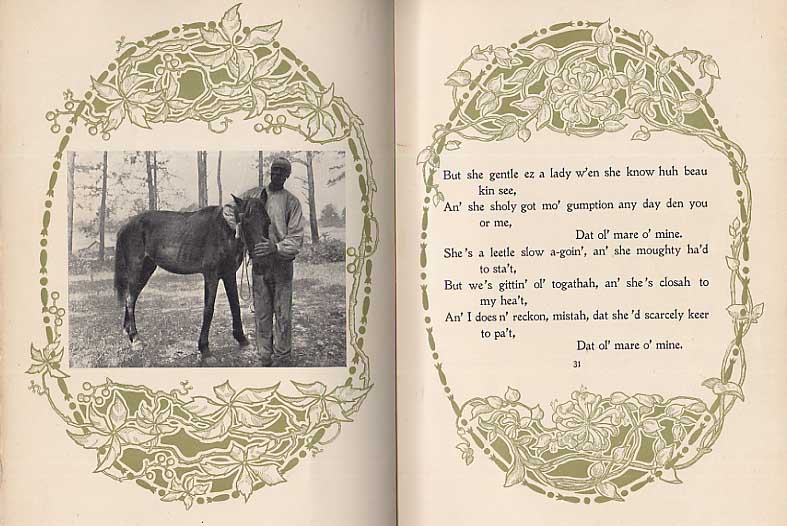 By: Dunbar, Paul Laurence. Illustrated with Photographs By the Hampton Institute Camera Club and Decorations By Margaret Armstrong

Beautiful book of Paul Laurence Dunbar's poems using standard English along with the dialect of turn-of-the-century black America. The book is highlighted by 52 wonderful black and white photos by The Hampton Institute Camera Club and marvelous intricate green tinted Art Nouve decorations by Margaret Armstrong.The lovely green cloth has black, maroon, white and gold gilt illustration which is sharp and clean as is the lovely design of the spine panel. The only defect is some minute foxing on the half title page which is lightly mirroed to the verso of the endsheet and some minute foxing on th...
View More... 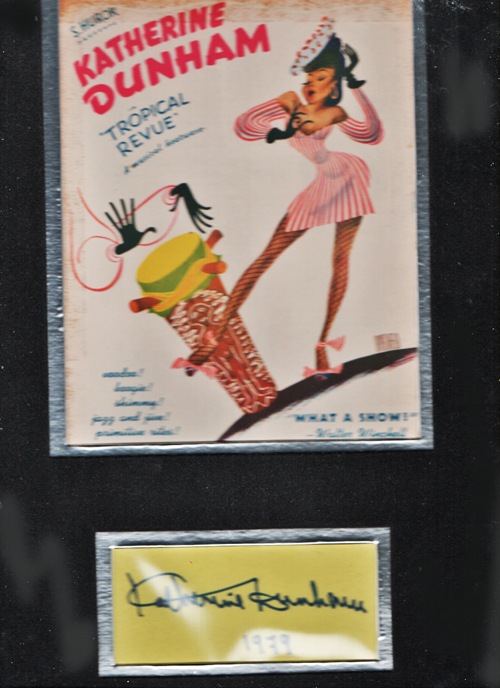 Very nice matted Hirschfeld color original herald for a Katherine Dunham dance revue titled "Tropical Revue" that played on Broadway in 1943. The herald is loosly matted along with a card that was signed by Katherine Dunham in 1979. The herald has faint edge staining from the old masking tape that was used to tape the herald to the mat otherwise vg. and lovely.
View More...

SIGNED BY RALPH ELLISON ON THE 1ST PG. OF HIS BIBLIOGRAPHY. Uncommon 30pg. scholarly journal on black literature that includes several articles on the important African American author Ralph Ellison including a 4pg. biblio. of his published works. Also includes "Lawd Today: Richard Wright's Experiment In Naturalism" by John M. Reilly and an essay on Wright's work "The Man Who Lived Underground." Former owner signature in red ink on the front cover and 1st pg. and old mailing label attached to the back cover.
View More...

Simon Estes In His Own Voice

INSCRIBED & SIGNED BY SIMON ESTES. Very nice large pictorial autobiography of the internationally renowned bass-baritone. Illustrated with 100's of photos most in color along with a music cd. Small mended tear to the top edge of the dustjacket. Fine/vg.
View More... 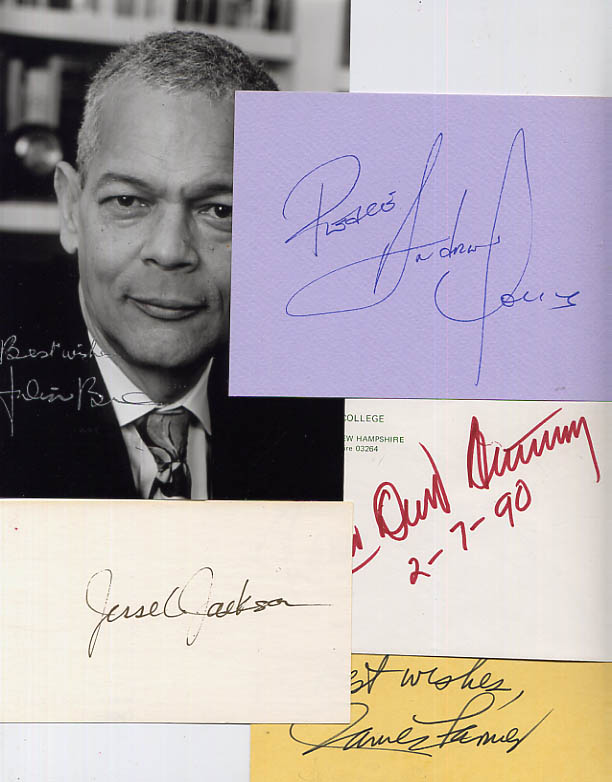 By: Fernandez, Benedict J. Photographs By, Wylie, James. Essay By

INSCRIBED AND SIGNED BY JAMES WYLIE. IN ADDITION THERE ARE SIGNED CARDS AND A PHOTOGRAPH BY SOME OF THE LEADERS OF THE CIVIL RIGHTS MOVEMENT LAID IN THE BOOK. THEY ARE:REV. RALPH ABERNATHY WHO HAS SIGNED HIS NAME IN RED INK ON A SMALL LETTER ENVELOPE, SMALL PHOTO OF JULIAN BOND WHO HAS INSCRIBED HIS PHOTO IN SILVER INK, INSCRIBED CARD BY ANDREW YOUNG, SMALL CARD SIGNED BY JESSE JACKSON, AND A SMALL CARD SIGNED BY JAMES FARMER. Stunning large catalog of 62 photographs by Benedict J. Fernandez's of Martin Luther King Jr., including portraits, candids and photos of the aftermath of his tragic de...
View More...

INSCRIBED AND SIGNED IN RED INK AND A SHAKY HAND BY STEPIN FETCHIT IN 1980. Black and white reprint portrait of the great but controversial African American character actor. Also included is an unsigned reprint portrait printed on heavy stock paper, and a piece of an envelope with Mr. Fetchit's address written in red ink and a shaky hand. Sold as a collection. Vg.
View More... 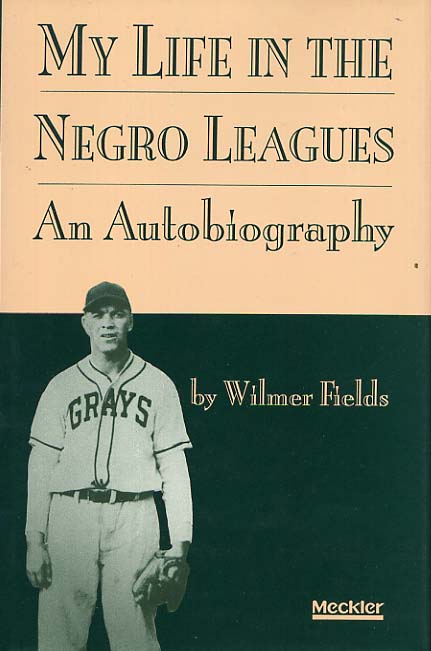 My Life In The Negro Leagues

INSCRIBED SIGNED AND DATED. FIELDS HAS ALO WRITTEN HIS TEAM HOMESTEAD GRAYS AND THE YEARS HE PLAYED FOR THEM. The life and times of the great African American baseball player and his experiences in the Negro Leagues. 14pgs. of photos. Uncommon. Fine/fine.
View More... 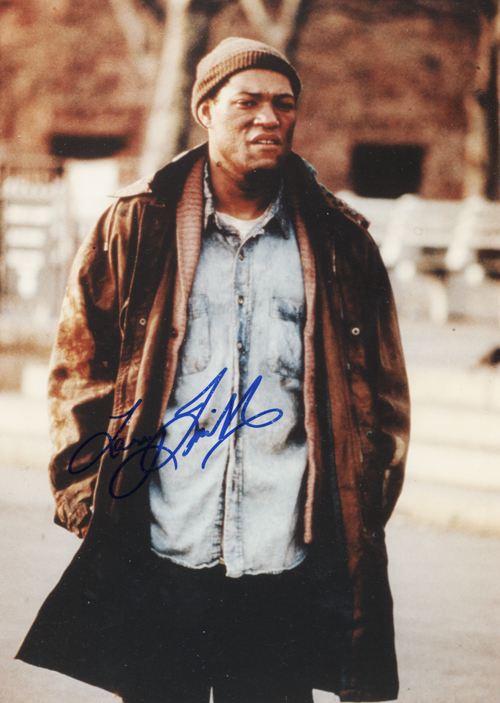 SIGNED IN BLUE INK BY LARRY FISHBURNE. Fishburne is an American film and stage actor, best t known for his roles as Morpheus in the Matrix science fiction film trilogy, as Cowboy Curtis on the 1980s television show Pee-wee's Playhouse, and as singer-musician Ike Turner in the Tina Turner biopic What's Love Got to Do With It. He became the first African-American to portray Othello in a motion picture by a major studio when he appeared in Oliver Parker's 1995 film adaptation of the Shakespeare play. From 2008 to 2011, he starred as Dr. Raymond Langston on the CBS crime drama CSI: Crime Scene In...
View More...

SIGNED BY CHARLES FULLER. Pulitzer Prize winning play about a murder set in a segregated army camp in 1944. The play featured early performances by Denzel Washington and Samuel L. Jackson. Made into a film in 1984 that was nominated for 3 Oscars including best picture and a supporting actor nomination for Adolph Caesar who was also in the original production. Fine
View More...

A Lesson Before Dying 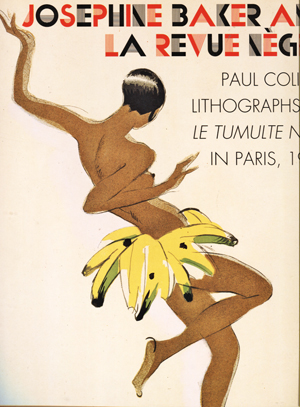 Pub. in conj. with a traveling exhibition. The catalog is illustrated with many of the artists photomontages and collages including some in color. Includes essays and text. Nicely produced and printed. Fine.
View More...

Blackface, Reflections On African-Americans And The Movies 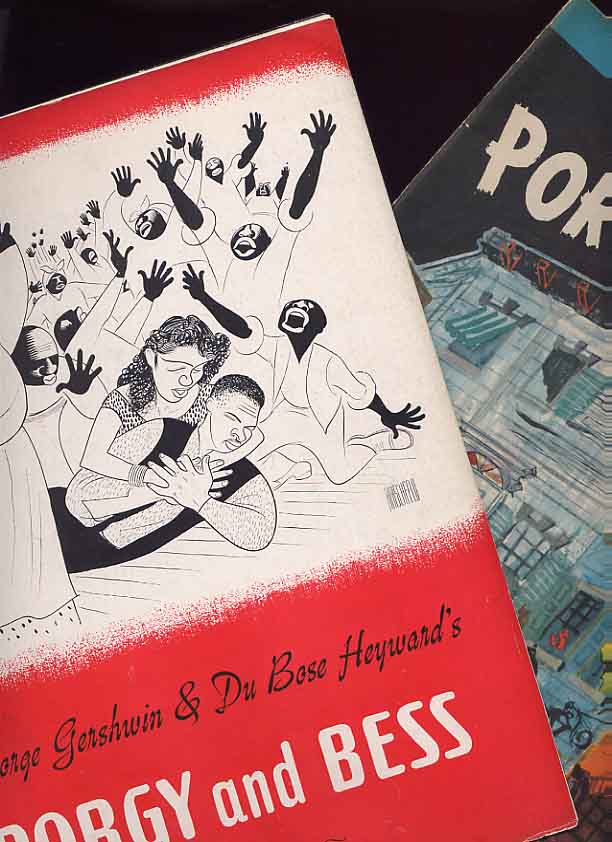 Two very nice original souvenir programs from early productions of "Porgy and Bess". The first program is 20pgs. and is from the 1942 production that starred many of the original cast members from the 1935 production including Todd Duncan. This production had a healthy run of 286 performances at The Majestic Theatre. Illustrated throughout with many photos and bio. information + there is a terrific Hirschfeld drawing of the cast on the front cover. Covers loose, and a small scrape on the back cover which has a photo of Todd Duncan. The 2nd program is from the 1953 production which also...
View More...