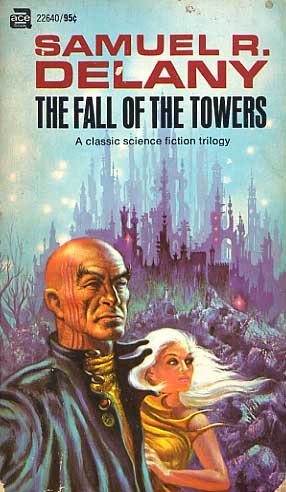 The Fall Of The Towers

INSCRIBED AND SIGNED IN FULL BY DELANY ALONG WITH HIS NICKNAME "CHIP." A revised edition of Delany's science ficiton trilogy. Inscribed copies of this book is uncommon. The paperback has the usual browning to the pages, and some light wear to nice artwork front cover by Kelly Freas. A fragile but vg. copy that is especially nice for the rare inscription. Also included are paperback original copies of Delany's "The Towers Of Toron" published as an Ace double in 1964 along with "The Lunar Eye" by Robert Moore Williams & "Empire Star" by Delany which was published by Ace Double in 1966 along with "The Tree Lord Of Imeten" by Tom Purdom. Both books have minute cover wear, light creasing and usual browning to the cheap paper used otherwise vg. Sold as a collection only.

Title: The Fall Of The Towers

The Fall Of The Towers