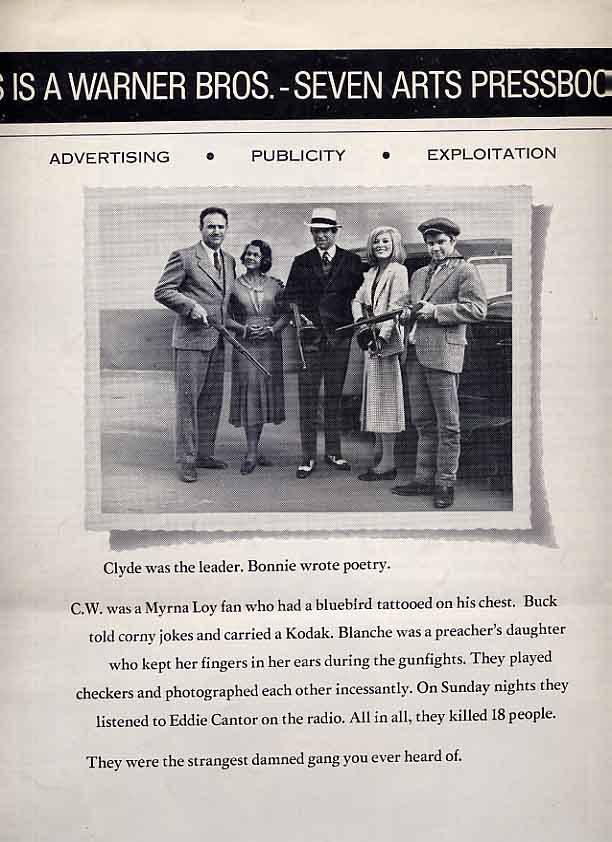 An original oversize 24pg. pressbook for Bonnie and Clyde. The film when first released caused a great stir and alot of controversary and is now considered to be one of the great films of the 60's and possibly of all time. The film was beautifully directed and written with star making performances from Gene Hackman and Faye Dunaway and in fact the entire cast was nominated for Oscars with only Estelle Parsons finally winning. The film itself was nominated for 10 Oscars including Best Picture but lost out to the safe and unoriginal "In The Heat Of The Night" and once again Oscar failed to recognize and honor a great American film. The pressbook is full of all the usual pressbook material ie poster repros., photos, publicity articles and more. A few very tiny tears along the edges of the book otherwise fine. Also included are two original 8" x 10" stills from the movie one is of the shoot out at the bungalow with Hackman and an hysterical Estelle Parsons in the background, the other is the shoot out in the swamp when Faye Dunaway gets shot, Beatty and Pollard are in the water with her.