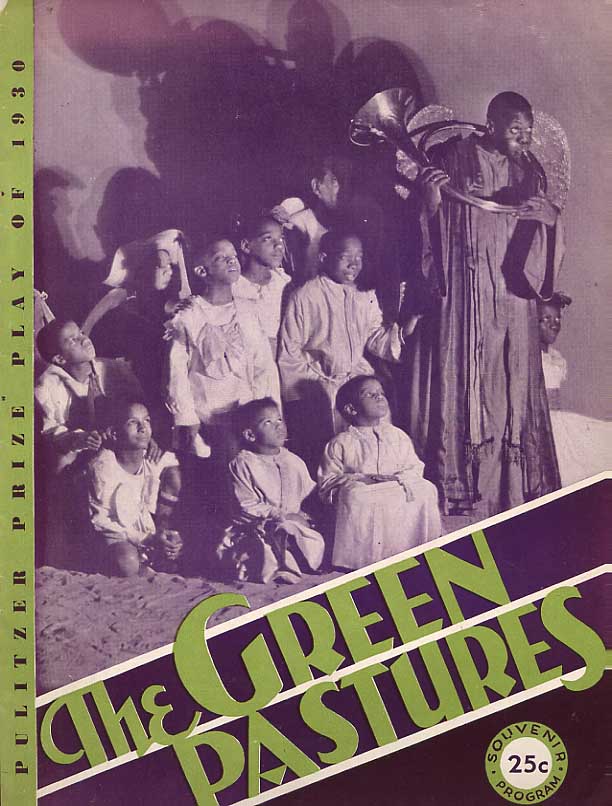 Two large souvenir programs from the Pulitzer Prize Play that Connelly based on a volume of Southern sketches called. "Ole Man Adam an' His Chilun." The programs include the rare original 32 pg. program from the 1930 production that was a big hit running for 640 performances. Unfortunately the program is lacking the I'm sure beautiful covers, and the title pg. of the program has a long corner piece missing that cuts into the text on the verso. The back pg. has chipping along the bottom edge and the edges and there are a few small margin chips to several pgs., but otherwise the rest of the book is vg. Illustrated with many nice photos from the play, which are printed in sepia. The 2nd program is 20pgs. and is from the 1935 production that ran for 71 performances. This program is printed with very nice covers in green and purple with nice Art Deco design which has a smalll faint touch of sun fading to the back. Also nice 1st pg. This production as well as the 1930 production starred Richard B. Harrison who made his Broadway debut at 66 with The Green Pastures, and died shortly after the 1935 production. Also nicely illustrated. Also included are 7 original vintage 8" x 10" publicity stills that feature artwork interpretations from the film version of the play that I assume were for publicity in newspapers + 1 original scene still. All the stills are sepia in tone from aging and one still has a tiny tear to the top white margin otherwise they are vg. and quite scarce. And finally we include a fine 1st edition paper copy of the screenplay that was published in 1979 by The University Of Wisconsin Press. Sold as a collection only.