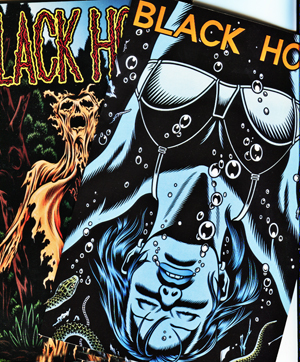 Set in the suburbs of Seattle during the mid-1970s, the comics follow a group of mostly middle class teenagers who, over the summer, contract a mysterious sexually transmitted disease known as "the Bug" or "the teen plague", which causes them to develop bizarre unique physical mutations, turning them into social outcasts. It was published as a 12-issue comic book limited series between 1995 and 2004. The first four issues were released by Kitchen Sink Press; after Kitchen Sink went out of business, Fantagraphics republished the first four issues and the remaining eight. A compiled hardcover volume was released by Pantheon Books in 2005. This collected edition, however, lacks many pages that were included in the first publication- the ones that showed some characters' faces. These pages are considered by some critics to be essential. This is a complete pristine as new collection of all 12 issues and are all first printings, that were published between 1995 and 2004. One of the seminal works of the graphic novel genre and , arguably the single most important work produced in the mid nineties, by one of the great masters of the art form and a towering figure in the graphic novel comic book movement. Each issue features full color front and back covers with Burn's great bold black and white drawings inside along with wonderful different endsheets for each issue. This is a rare opportunity to own this magnificent complete set. Fine.