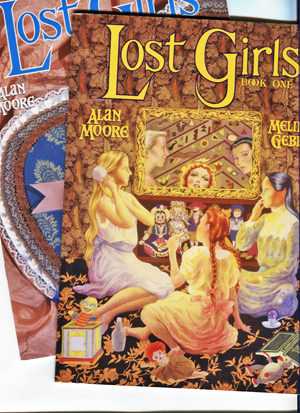 The two vol. set first published in 1995 by Kitchen Sink Press of the controvesial and complex graphic novels that "depict the sexually explicit adventures of three important female fictional characters of the late 19th and early 20th century: Alice from Alice's Adventures in Wonderland, Dorothy Gale from The Wizard of Oz and Wendy Darling from Peter Pan. They meet as adults in 1913 and describe and share some of their erotic adventures with each other." The comics are beautifully drawn and colored and are in pristine unread condition. These comics had a long and winding rode of publication not to mention the controversary that they attracted.