The World Of Tennessee Williams

Marvelous picto. bio. on the life of the great playwright. Illus. w. over 200 rare photos,posters etc. 8pgs. in color. Errata sliplaid in. Lacking the dustjacket, light soiling to the cloth. Table of Contents page irregularly bound in. Vg+
View More... 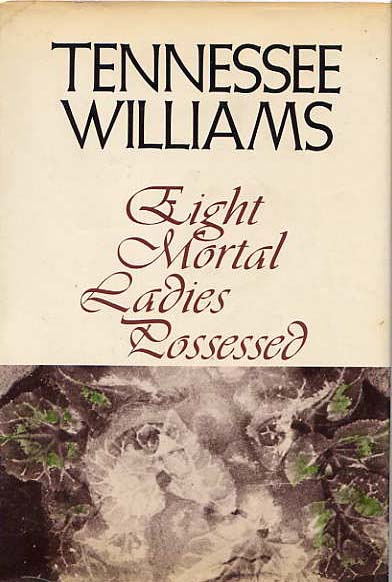 vg/vg/light soil to cover,sliver of damp stain to back panel of dj. & corner of front panel. 6 stories by the great playwright. 1st ed. Binding is cl.w.dj. Laid in the book is a nice 4pg. foldover for "A Birthday Remembrance for Tennessee Williams" that was held one year after his death in 1983.
View More... 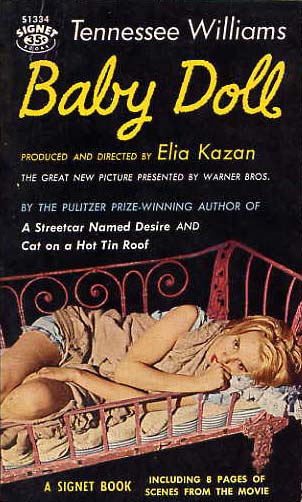 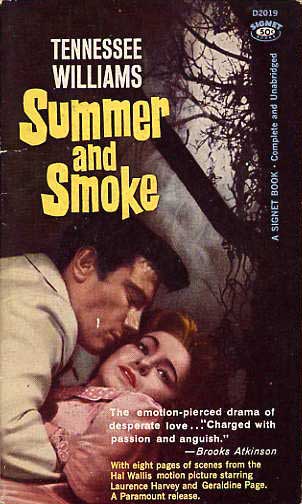 The play illus. w. 11 stills from the movie. fragile. Small scratch on frnt. wrap. browning to pgs. owner sig.Vg. Laid in is a 16pg. showbill program for the film version of the play. Includes bios. and is illustrated with a still from the movie on the front cover. Light wear. Vg.
View More... 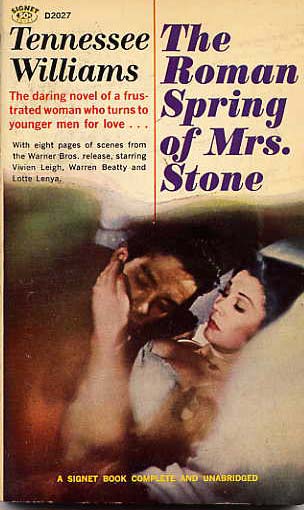 The Roman Spring Of Mrs. Stone 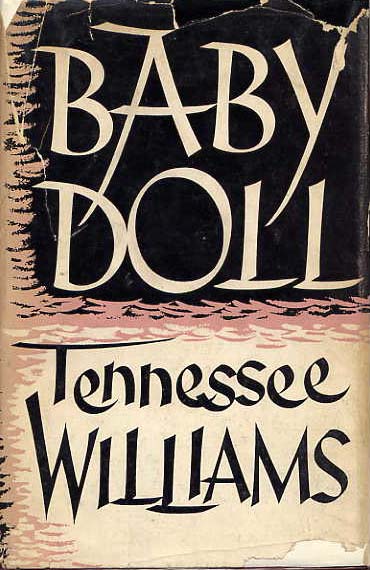 Baby Doll, The Script For The Film

Vg+/vg/Ink note on frnt. flap. There are sm. pieces missing along the sp. top & bott. edges of dj. There is a larger but sm. piece missing from back wrap. Williams's only orig. screenplay created tremendous controversy when 1st released. Directe d by Elia Kazan. Illus. w. 8 stills on plts. not in the Am. ed.
View More... 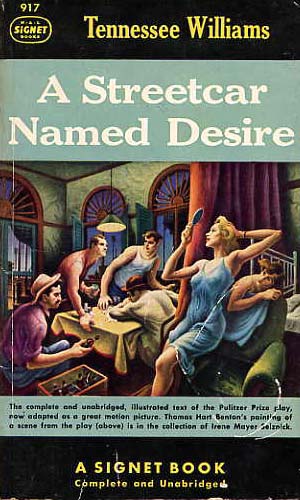 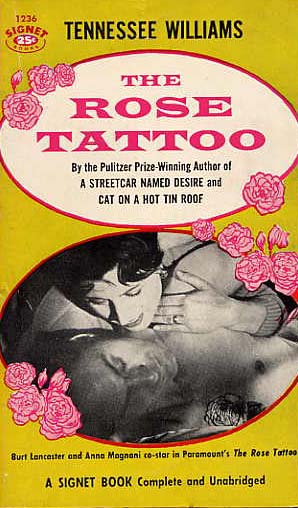 Movie tie-in ed. inclds. the play + intro. by the playwright along with 8pgs. of stills from the movie. This was the film that introduced Anna Magnani to a wide American audience and of course won her a well deserved Oscar.There is a light dent to top & bott. of cover which is mirrored to some pgs., otherwise this is a tight and uread copy. Also included is a large 24pg. souvernir program from the original Broadway production that starred Maureen Stapleton, Eli Wallach, Don Murray and a young Sal Mineo who is pictured in one of the photos. The front cover has a lovely silk screen three color i...
View More... 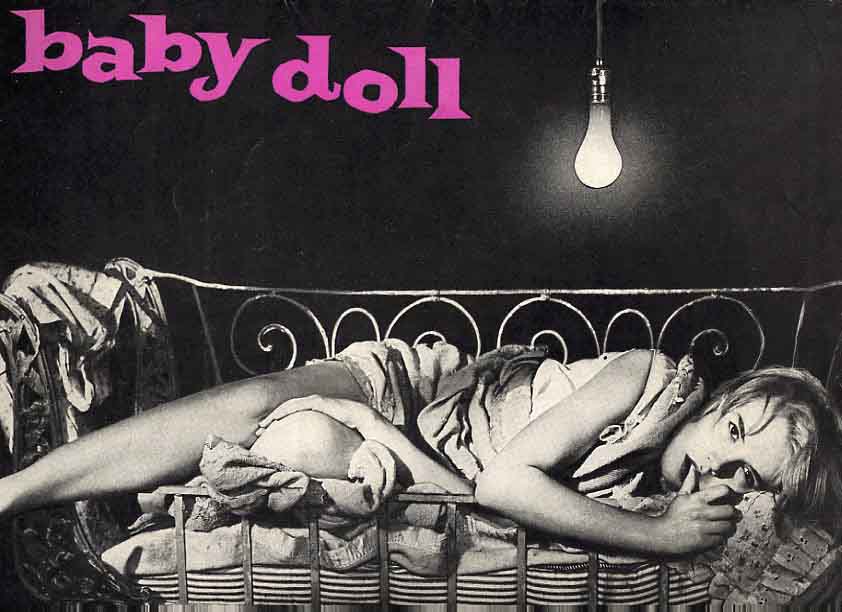 Very nice 24pg. pressbook for Elia Kazan's film "Baby Doll" that had a screenplay by Tennessee Williams. The film was met with tremdous controversy including a public comdenation from New York City's Cardinal Spellman. The film was favorably reviewed and received Oscar nominations for Carroll Baker & Mildred Dunnock's performances and William's screenplay. Memorable also for the great photo of Baker in a baby crib that covered a huge billboard in Times Square and is reproduced in the pressbook. The book also includes many ads, posters, publicity material and laid in is a two colored l...
View More... 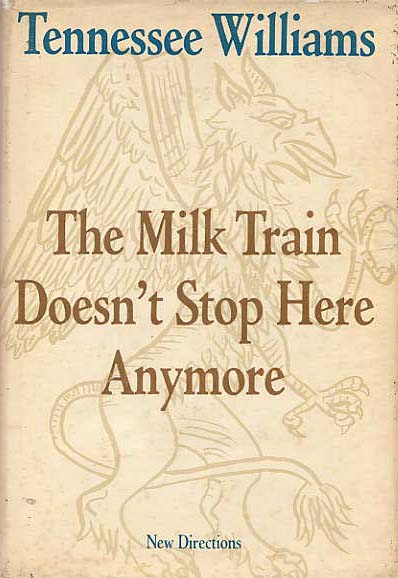 Attractive and uncommon 2 record set recording of Williams's masterpiece set in a box that starred Montgomery Clift, Julie Harris, Jessica Tandy and David Wayne. Also included is a large 12pg. booklet with notes by Williams and William Inge. Illustrated. Also laid in is a playbill for the 1965 revival of the play that starred George Grizzard, Pat Hingle, Piper Lauie and Maureen Stapleton. The records have never been played, the cover to the box is loose.
View More... 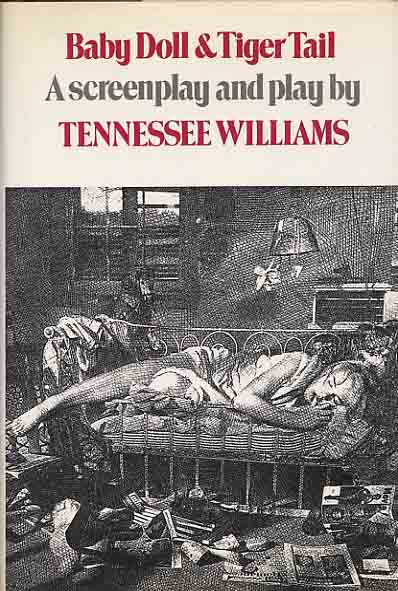 Nice edition of Williams's original screenplay that shocked America in 1956 and his play that was based on the screenplay. Fine/fine.
View More... 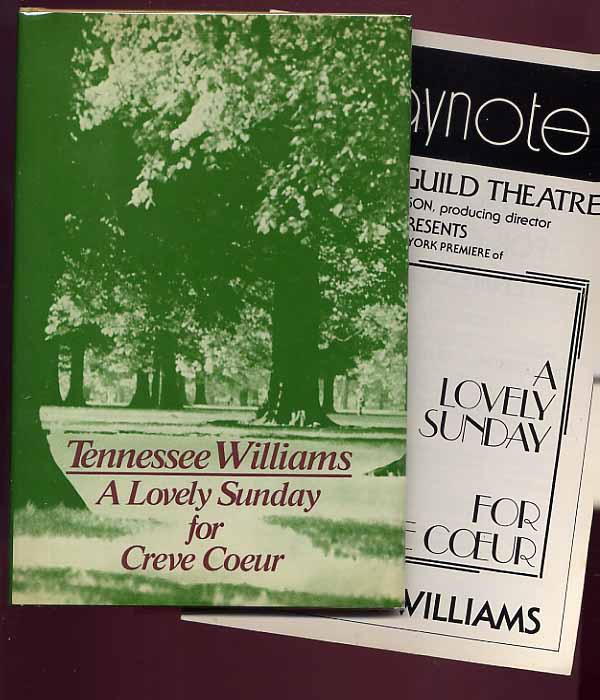 A Lovely Sunday For Creve Coeur

SIGNED BY TENNESSEE WILLIAMS ON THE FRONT ENDSHEET. 4 character play that had a New York premiere in 1979 with the great Shirley Knight in the lead. Illustrated with 1 photo of the model of the set. Laid in is the program for the play from Hudson Guild Theatre that has been signed by all four actresses who were in the play: SHIRLEY KNIGHT, PEG MURRAY, CHARLOTTE MOORE AND JANE LOWRY. Fine/fine. Laid in is a folded poster annoucement for "In The Masks Outrageous And Austere" along with a small announcement.
View More...

Tennessee Williams Selections From His Writings Read By The Author

Long playing record of the great playwright reading from his own works including scenes from "The Glass Menagerie, the short story "The Yellow Bird" and published and unpublished poems. Includes Facts About Me by the playwright on the verso of the album. Light wear to the album cover, the record itself is as new and has never been played. Nice Williams item. Scarce.
View More...

Two interesting catalogs of works by Tennessee Williams published by the now closed Gotham Book Mart. The first one is most likely from 1972 and is a small oblong catalog 24pgs. with 69 entries. Photos on the front and back covers. Vg. The second catalog is 8 1/2" x 11" and appears to have been published after his untimely death in 1983. 38pgs. with 509 items listed. Photos of Williams on the front and back covers. Vg. Sold as a collection only.
View More... 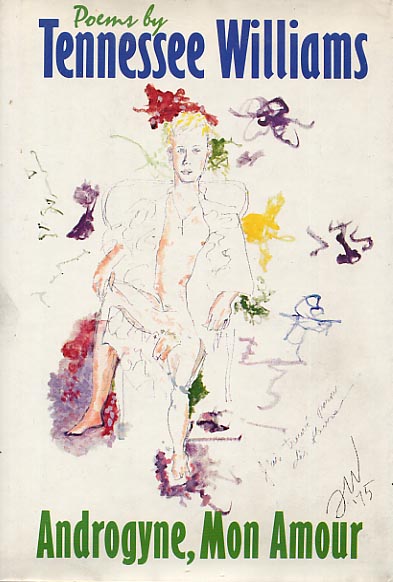 SIGNED BY TENNESSEE WILLIAMS. His 2nd collection of poems. Dustjacket is illustrated with a painting by Williams. Invitation to a publication party laid in. Fine/fine
View More... 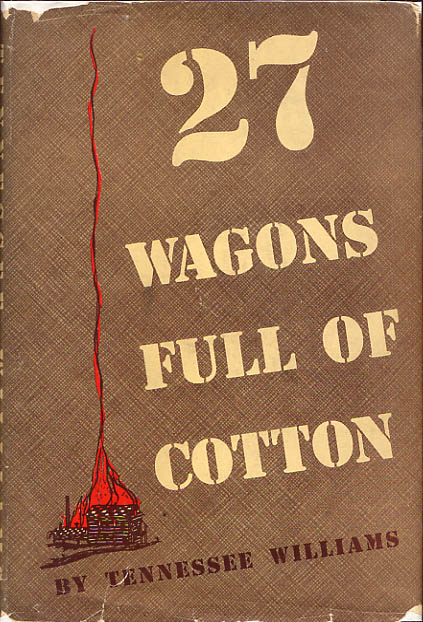 The true first edition of eleven short plays by the great playwright including 27 Wagons Full Of Cotton which was later adapted by Williams into his original screenplay "Baby Doll." Also includes the very short play "This Property Is Condemned" which was made into a poorly received film in 1966 with Natalie Wood & Robert Redford in the leads & a screenplay by Francis Ford Coppola. Some shallow chipping to the back panel of the dustjacket also minute chipping to the top edge of the front panel, and the spine panel. Small bump to the top corner of the cloth. The insides are fine....
View More... 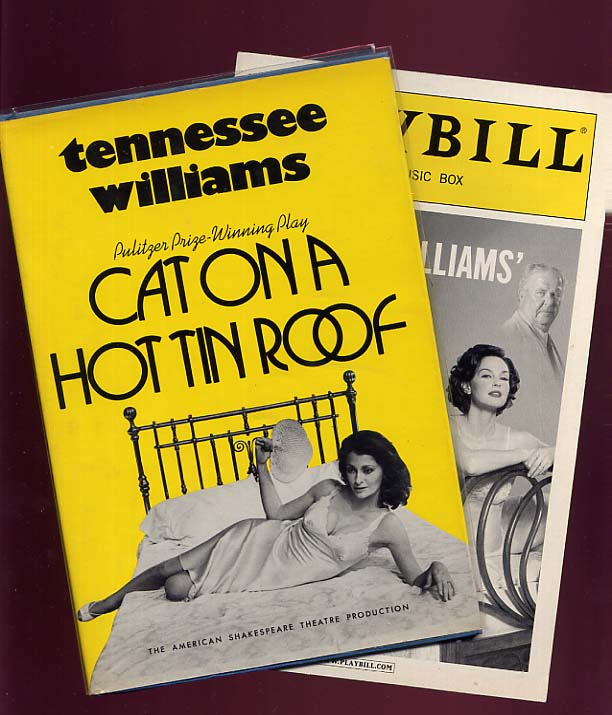 Cat on a Hot Tin Roof

The great Tennessee Williams play that was revived by the American Shakespeare Theatre in 1974 and contains the completely rewritten third act along with other revisions. This production starred Elizabeth Ashley (who is pictured on the front cover) Keir Dullea, Kate Reid and Fred Gwynne. Small name label of Bridget Aschenberg, a playwrights' agent for more than 40 years on the front pastedown, faint browning to the endsheet and pastedown where a newspaper clipping wa laid in. Laid in is a playbill from the 2003 production of the play that starred Ashley Judd. Near fine/fine.
View More...